Our Top Picks Of Must See Movies

After a day of working from home, DIY or home schooling the kids there really is no better way to relax than a movie. Either with the family, as a couple or on your own with a glass of wine.

Now we can’t go to the cinema a number of channels and streaming sites have made more films available – from Netflix and Amazon Prime to Sky Cinema and even iPlayer there are a number of great films on offer to help pass some time and keep you entertained.

We’re suggesting some bang up to date offerings and some older favourites – all of them available to watch at home right now:

The Secret Life of Pets 2

Continuing the story of Max and his friends, following their secret lives when their owners are looking the other way.

As Max’s situation at home changes and a new addition gives him something new to concentrate on his friends rescue a rare white tiger from an evil zoo owner and need his help to save the day.

A brilliant sequel that actually manages to be better than the first instalment and will keep parents just as entertained as the kids.

Watch it on Sky Cinema and Amazon Prime Video now.

Another adventure with Elsa, Anna, Kristoff, Olaf and Sven.

Central to Frozen 2 is the reason Elsa was born with magical powers and the adventure she and her friends embark on to find the answer and right wrongs of the past.

In ‘Frozen’ Else feared her powers were too much for the world, in ‘Frozen 2’ she must hope they are enough.

While this never quite hits the heights of the first film the animation is stunning, the storyline engaging and the music brilliant. Boy or girl, young or old, it has something to entertain everyone and will become another family favourite.

Rent of Purchase it from Sky movies or Rakuten Movies now.

A Bit of Fun

This is the End

A group of friends struggle to overcome petty prejudices, fragile egos and personality flaws in the gaping jaws of the apocalypse.

Seth Rogen invites his Canadian friend Jay Baruchel to L.A., hoping he’ll warm to his new friends, James Franco, Jonah Hill and Craig Robinson - all playing twisted versions of themselves. When the apocalypse hits, they need to band together but instead, find themselves fighting over the last Milky Way.

Delightfully sprinkled with cameos and film references spanning from Pineapple Express to The Exorcist, This is the End looks like it was as much fun to make as it is to watch.

The seedy underbelly of competitive ten-pin bowling is exposed in this hilarious 90s classic. Woody Harrelson is the one-handed, down-on-his-luck bowling has-been, who discovers a talented but dim Amish bowling prodigy in Randy Quaid, who he wants to exploit for success, plus reek revenge on his former tormentor and bowling champion, Bill Murray.

Harrelson crassly navigates the Amish culture to convince the traditional-values family to let their naïve son enter the bowling championships in Las Vegas – and takes him on the road trip of a lifetime.

A Romantic Night In 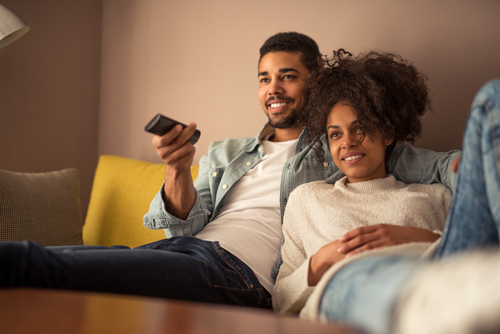 A Star is Born

Directed by and starring Bradley Cooper as a successful, self-loathing, heavy-drinking rock star and Lady Gaga in a standout performance as his inspiration and salvation.

‘A Star is Born’ is a searing, heart-wrenching story of true love set against the brutal realities of the rise and fall of stardom. It pulls you in, lifts you up, makes you laugh and breaks your heart.

The Shape of Water

Sally Hawkins is Elisa, a timid cleaner at a Cold War laboratory in the U.S, who falls for a water-dependent alien being held captive and tortured by the repugnant bully, Colonel Strickland (played brilliantly by Michael Shannon). When she overhears that the creature is due to be killed, nothing stands in the way of her determination to be with her one true love.

This beautifully filmed tale transports you into a watery world of understanding the misunderstood, accepting the impossible and believing in love against all the odds. Available on Sky Cinema

For a Bit of Excitement

Most astronaut movies present space travel as something shiny – something beautiful, majestic and highly controlled.

First Man, new Neil Armstrong biopic from Whiplash and La La Land director Damien Chazelle, gives a rather less sanitised impression of astronaut life in the 60s, as the US raced to put the first man on the Moon with its Apollo programme. The rockets are rickety, the spacesuits are vomit-stained and everything just looks a bit grubby.

The films stunningly bring to life the novel by Mario Puzo, following the same mafia family through the decades, centring on the lives of Vito and Michael Corleone.

This is nine hours plus of the highest quality film making, story telling and acting ever put on film and an absolute must-watch for anyone who loves cinema.

Available to watch on Sky Cinema

We are currently experiencing problems with our phone lines, which are preventing us from being able to talk to you directly.
Please use our support area for further assistance, or our live chat.